The other day, I saw Mr. Jimmy Fallon and The Roots singing with the talented Ms. Idina Menzel on Youtube. I posted this on my Facebook status page.

The next day, I shared my dream with my students. Hearing my enthusiastic declaration, one of my students asked me why I would want to do it. Here were my reasons.

Just by situating himself with a talented group of musicians, Mr. Fallon is expressing the power of collaboration. He invites famous singers into his domain without making them the focal point. Rather than putting on a concert by one, he and his “friends” make beautiful music together. Mr. Fallon is showing his audience how much more fun we can have when we work with others.

2. Importance of Music and Art in the Classroom

Mr. Fallon sings with various musical instruments that can be found in any elementary classroom. By doing so, he is showing the importance of keeping music in our classrooms. With his actions, he is arguing for more music and art in the classrooms. He is clearly using his influence for good.

3. Importance of Having Clean Fun

Often times, the contrasts evident in his videos are the source of fun. By not allowing his guests to take themselves too seriously yet demonstrating the serious talent he and The Roots posses, Mr. Fallon expresses the art of understated sophistication. I often tell my students that one can’t be funny without being exceedingly clever. Mr. Fallon shows how to be light-hearted without degrading himself or his guests. With his fun personality, he shows how to have fun without being vulgar and cruel.

Most importantly, because he uses what is available in the actual classroom, he is showing tremendous support for teachers. He reminds the public that teachers with limited resources are making beautiful music both with and for our children as was illustrated in this video below.

So how can I not want to be a part of that? I hope someday I will become important and famous enough for Mr. Fallon to invite me to sing with him. If not, maybe he should just do it because he is a nice guy. I can always dream, right?

A few weeks back, a STEM Outreach Coordinator from Taft College contacted me to see about collaborating with the Coding Club. She brought 24 tubs of Lego Mindstorms NXT and 10 Macbook Pros for my students to use. She also supplied a 10-week curriculum for my students to work on.

After much negotiations, we launched the program on February 21st, 2014. And here are my observations so far.

Challenges of Sustaining the Club

Even though the Coding Club has been one of the most successful clubs on campus, after our highly successful Hour of Coding event some students began to lose interest. It was partly because of the huge gap between the meetings. Immediately after the Hour of Code event, we were on Winter Break for two weeks. Then I was not in town for two weekends in a row because of my classes and a conference. To make matters worse, we had several Monday holidays in January and February, which made holding the club meetings difficult since they are usually on Mondays.

Furthermore, students were advancing quicker than I could financially support them. They wanted to create complex projects using several Arduino boards and LEDs that required more supplies, which I simply couldn’t afford. This created a huge challenge for the club.

Even though I had all the free tools available, without hands-on projects for the students to work on, learning to code became another “class” for them to manage rather than a meaningful learning experience. Being contacted by Taft college, therefore, was the lucky break that I desperately needed.

On February 21st, 2014, my supplies arrived. It has only been two weeks since we began, but I am seeing amazing things happen. 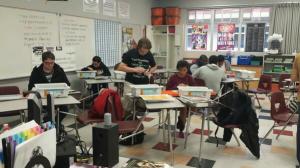 Once I began advertising to the student about using Lego Mindstorms robots, I had several new students. They all cited wanting to work with Legos as their reason for wanting to participate. Clearly, the name recognition was working in my favor. Even though a few students have never worked with Legos, they all knew and have heard of them. Because of its reputation and ease of use, Lego Mindstorms provided an edge that neither e-textiles nor Arduino boards had over my students.

Rather than simply interacting with a screen, the students must manipulate the materials while working with these robots, which can be programmed to sing, talk, and even “dance.” Although many students are following the designated curriculum, I noticed them simply “playing” with the robot before moving onto the next challenge. One student programmed for his robot to “sing” before turning; another student programmed the robot to flash lights after completing three weeks worth of challenges ahead of everyone else. Because of its reputation as a toy, these robots seem to bring out the playfulness in my students in addition to teaching them engineering and programming skills.

While working on the robots, my students constantly communicate with one another. Many of them opted to work in pairs partly because we don’t have enough robots, but partly because they wanted to work with a partner. Even though I tried to encourage them to work in groups, it was not possible while they were strictly learning to program using only the digital tools. I can see that working with these robots facilitates a fantastic social learning environment. It is equally fascinating to see a certain order of information sharing happening in the classroom. I noticed that my struggling students naturally gravitated towards others who already advanced to the next step to get information and guidance, and then passed the information onto others who were still struggling to accomplish the next task.

Since I am aware of the benefits of what Gabe Zimmerman calls the 3-Fs, – Fun, Friends, and Feedback – of game-based learning, I decided to create a “Leader Board” to keep track of my students progress before the project began. I create an area on my board where a student could put an orange star his or her name after accomplishing each task. Seeing others receive stars has done wonders for some students. This became evident when I took a picture of the board to be included in this post. A student said, “Wait, Mrs. Glazer! We are almost done. Please take the picture after we put our star up!”

Since all activities are voluntary and being done after school, some students elected to attend more meetings than others. One such student is a freshman who has spent additional hours during lunch and after school. Even though he is one of the youngest ones in the club, he has accomplished more tasks than any of the other members because he spent the most time on his project. As a result, he has become an informal leader of the group, which has been a great experience for him.

Although these Lego robots can do amazing things, they are also extremely flimsy. My students are having a hard time controlling the robots because all parts are made of plastic. Some of my students have been stuck on a particular challenge not because they didn’t know how to program or construct their robots, but because the back wheel keeps coming off. However, I could tell this has taught them to persevere. Just today, I watched two boys attempting to control their robots while crawling on the floor for nearly an hour. Their robots kept moving out of bounds, which happened at least 15 times, but they kept trying to get it right.

Most importantly, this project has my students’ full attention. Since we began, I have been asked pretty much everyday if I was going to be in my room during lunch and after school. Even though we are only supposed to meet one hour after school on Thursdays and two hours on Saturdays, I had to stay until 5 p.m. on Thursday, March 6th, 2 1/2 hours after school ended. That doesn’t include 1 1/2 hours I stayed after school on Monday, March 3rd, 2 hours on Tuesday, March 4th, and 2 hours on Wednesday, March 5th. Furthermore, students asked if I could stay after school on Friday, and they said they definitely wanted to come at 9 a.m. on Saturday not the normal 10 a.m., so they could spend more time with the robots. Of course, not everyone is coming to every meeting. But at any give day, at any given day I have 3-4 students working on their robots after school.

It has only been two weeks, but I am thrilled to have the Lego Mindstorms robots. I can see how much my students are learning to problem solve and work collaboratively. I am certain that they are learning additional computational thinking skills such as problem solving and programming. They are certainly engaged and focused. I can’t wait to see what my students will do next!